If you’re looking for a place to find an honest conversation about all things education, Steven Singer’s (not the Philly jeweler) blog gadflyonthewallblog is a good place. Mr. Singer speaks truth to power ranging from race and poverty in education to school privatization. One of Mr. Singer’s latest entries speaks of a study, authored by Sarah Cohodes of Columbia University’s Teachers College, suggesting a way to reduce the Black-White achievement gap.

I believe that the “no-excuses” philosophy does not empower children of color. Discipline is necessary for every academic setting. However, I do not believe that a militarized approach to disciplining children is what works best to get the best out of them academically or otherwise. I abhor the hypocrisy that such an approach is necessary for Black and Brown children. What is especially insulting is the cultural appropriated phrase “no-excuses;” hijacked to cajole particularly the African-American community to the side of these organizations.

The message does seem inspirational. However, the mission of these schools is to improve test scores; a culture of conformity and compliance is the means to achieving that end. The key is to sternly discipline students, maximize instructional time and minimize distractions. These schools align themselves with key figures of African-American culture and buzz words and/or phrases of the Black freedom struggle expressed in African American households i.e. “you have to work twice as hard as everyone else,” to garner support for the “no-excuses” ethos. Many of these schools, like traditional public schools, are founded on the “Protestant ethic;” a set of values that emphasize the importance of hard work and no excuses.[1] However, there is rarely room for restorative justice in this atmosphere,[2] rarely is a curriculum designed from an Afrocentric perspective and often left unsaid is the message of resistance. But I digress.

On the topic of the “no-excuses” philosophy, Columbia University professor Christopher Emdin said, “There is a false attachment between being complicit and docile to being academically rigorous.” Emdin said that “no-excuses” schools, in particular, do more damage to children of color although they are framed as a better option. However, Cohodes, a faculty colleague of Emdin, sees “no-excuses” practices as potentially beneficial to public school district academic achievement. One piece of evidence she cites is the work of Harvard researchers with the Houston Independent School District (HISD).

Those researchers found that students in schools that adopted “no-excuses” charter practices saw test score gains in mathematics. Those “no-excuses” practices utilized in Houston were identified in New York City as being correlated with the largest test score gains. Those practices were (1) intensive teacher management, (2) data-driven instruction, (3) increased instructional time, (4) intensive tutoring, and (5) a culture of high expectations. Not mentioned was how “no-excuses” practices result in a lot of student discipline, based “broken-windows” logic or in other words, sweating the small stuff. Detentions and suspensions abound.

I’ve spent my entire career in education in the state of New Jersey. I’ve taught in schools that practice “no-excuses.” New Jersey offers fresh research ground with untapped data to be analyzed. According to the New Jersey Department of Education (NJDOE), New Jersey has ninety-one charter schools/organizations with a combined student population of 48,846. This includes renaissance charters.[3] Most of these schools serve low-income children of color. Of the ninety-one schools, sixty-two schools or 68% are listed within the top twenty-five municipalities of persons living below the poverty level. In New Jersey, 39% of the traditional public school population is Black and Latino;  86% of the charter school population is Black and Latino students  – 53% of all charter school attendees are Black.

Not all charter schools in New Jersey follow the “no-excuses” mantra. However, Urban Hope Act legislation[4]facilitates the expansion of “successful” charter networks, such as Cohodes prescribes. Many of those schools practice “no-excuses.” The Urban Hope Act districts include Camden, Newark, and Trenton. Each is in the top fifteen municipalities of persons living below the poverty level. These districts also have a student population of predominately Black and Latinos children.

*Percentages are based on schools reporting academic performance data to NJDOE

Looking at this data alone, one could surmise that Cohodes may be on to something. “No-excuses” charter networks such as KIPP, Uncommon, Democracy Prep, and Mastery run schools in at least one of these municipalities. Where I believe Cohodes study goes wrong is disregarding the impact of “no-excuses” disciplinary measures for the sake of highlighting and applauding higher achievement levels. “No-excuses” disciplinary practices result in more student discipline. Unfortunately, there is no such data submitted on student detentions from New Jersey schools. Concerning student expulsion data the majority of schools who submitted data had few expulsions or none at all. The best available indicator of school discipline for New Jersey school data is the student suspension rate.

*Percentages are based on schools reporting discipline data to NJDOE

The charters in these three districts outperform traditional public schools academically. At the same time, they discipline a higher percentage of students than those traditional public schools. Looking at the numbers, one could conclude there is a relationship between high student proficiency levels and high suspension rates; that the more you suspend, the higher school-wide student proficiency will be. These stats on the surface affirms Cohodes initial suggestion. However, surmising a relationship based on these comparisons isn’t definitive. More analysis is needed to see if a real relationship exist.

Using the NJ School Performance Data provided by the NJDOE for SY 2016-2017, I ran a regression analysis to find if a relationship exists between charter school suspension rates (SSR) and charter school-wide proficiency in language arts literacy (SCHLAL) and mathematics (SCHMAT). Specifically, I am looking to answer the following question: does a charter school’s suspension rate positively influence its school-wide student proficiency in language arts literacy and mathematics?

In both regression tests, I controlled for the following indicators: (1) % population of economic disadvantaged students, (2) % population of Black students, (3) % population of Latino students, (4) % of students who are English language learners, (5) % of students with an academic disability, (6) % of students chronically absent from school, (7) % White teachers in a school, (8) % Black teachers in a school, (9) % Latino teachers in a school, (10) % daily teacher attendance, and (11) average yearly teaching experience of teachers. All 91 schools did not report data percentages for every variable. However, 80 of the 91 charter schools (88%) did report data for the language arts literacy variable and all other controls when analyzing school-wide language arts literacy proficiency. 75 of the 91 charter schools (82%) did the same for mathematics and the other control variables. 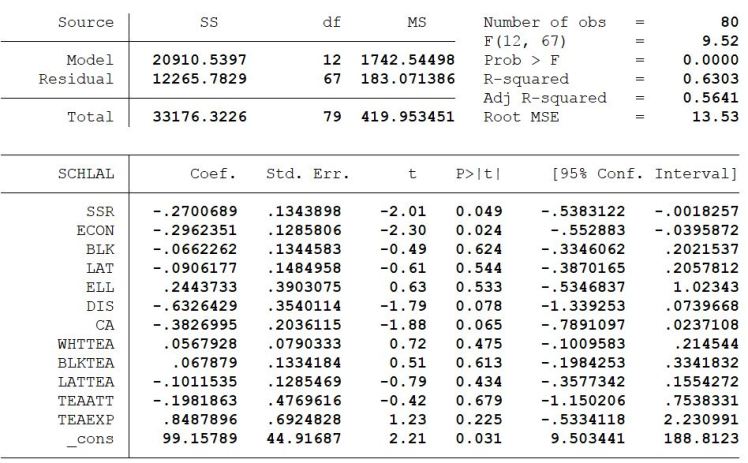 *Variable data is based on charter schools data reporting to NJDOE

There is a strong correlation between the variables, although it is not a significant one. A deeper dive into the data is necessary to explain the relationships shown here and to test for causation. This relationship concerns Black students in particular because according to a 2016 study, school suspensions account for 20% of the Black-White achievement gap. The same study asserted that high suspensions rates can undermine student achievement as a whole, even for students who do not get suspended.

* Variable data is based on charter schools data reporting to NJDOE

As said earlier, I do not agree with the “no-excuses” philosophy or the practices that come from it. I do believe that this philosophy and the practices that stem from it harms children of color, particularly Black students – there is evidence to back my concern. There is commentary that speaks up for the cultural relevance of the “no-excuses” philosophy. I counter that commentary with the assertion that the idea of “no-excuses” has a high level of nuanced difference when espoused by parents of color versus charter organizational leadership who tend to be White. For all the lauding of “no-excuses,” organizations are having second thoughts on the philosophy; one charter organization that championed the philosophy actually changed course. I do not sense an agenda driving Cohodes’ study, however, based on my brief analysis, I am uncomfortable prescribing “no-excuses” in traditional public schools.

I do not believe that replicating harmful discipline practices in public schools will help improve the academic performance of Black and Latino children attending public schools. To my knowledge, White parents have not historically sent their children to “no-excuses” schools and I wouldn’t expect them to start, even with the knowledge of Cohodes research. In fact, I would expect White parents to protest against “no-excuses” entering their children’s schools. If advocates call for these practices to only be adopted in heavily populated Black and Latino public schools, it would only confirm the racism of “no-excuses” proponents.

With all of that said, I do not believe the road to the promised land of academic achievement is paved on the concrete of no-excuses – especially for Black students.

[3] Renaissance schools are charter schools/organizations that take over failing schools from a school district as per the Urban Hope Act legislation.

[4] The Urban Hope Act, signed into law in 2012 and amended in 2014, allows for charter schools, referred to as renaissance schools, to “takeover” administration of academically underperforming schools in the cities of Camden, Newark and Trenton.